I remember first playing Wave Race 64, early in the N64’s life cycle and being amazed by a genre-defining gameplay that featured not just racing, but racing on water with jet skis and with player-controlled stunts to boot. Aqua Moto Racing 2 ($0.99)

is just as good as Wave Race with just as much if not more content and similar gameplay. This isn’t a light version of a better console racing game or an unfinished racer with a couple levels to play, but a full blown title here that I would rank at the top of the App Store’s racing list. It features many tracks and solid gameplay for any fans of racing titles or players looking for nice graphics and environments to explore. 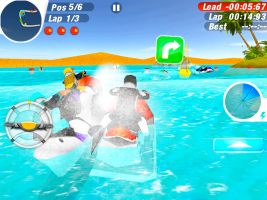 The game features beautiful graphics that are very apparent in the backgrounds, made of polygons and running ‘in game’ (not flat backgrounds) with great detail. There are many landmarks and terrains all over each track giving the tracks personality. Waves are all over the place and really make you feel you are on high-terbulant waters tasting the splashes. Objects in the background or on the tracks themselves include large stones, pyramids, and windmills. Some jaggies are apparent and lack of anti aliasing but you really have to stop and look to notice them.

OpenFeint support is integrated into the game and it is very well pulled off in this title. Various achievements can be unlocked though the races and sent to challenge friends. Ranking systems (both global and friends) per each track are also shown after the race and tell you how well you performed compared to others.

Being able to choose iTunes Library from the sound menu is a great addition to the title not seen in many games at all on the App Store. Although I really enjoy the music the game has to offer as it is quite upbeat and techno like, and that is the type of music racers should have – making you zone out.

The option menu is different during the race (that can be accessed by pressing the pause icon) than it is in the main menu. Accessing from the main menu gives players more options such as ‘Auto Stunting’ that controls whether stunts will occur at all in game.

Aqua Moto 2 nailed down the touch controls real however in pretty much any of the options, although it would be nice to have both an accelerate and a break button instead of having to pick one. I found using one of the manual-break controls to be harder as sometimes just tapping the acceleration while turning works really well to cut corners.

This is a water jet ski racing game that allows you to do very nice jumps and stunts off various platforms. You race five other players throughout the game’s 24 locations (levels) and have to follow a pointer as well as navigate the waters between floating cone-landmarks. An arrow turns green near each cone players pass in the direction it is pointing from. Missing a cone three times in a race causes the race to end in failure. When passing each arrow and cone, players gain a bonus piece of a transparent circular-icon on the right side of the screen that fills up giving boosts that allow for better and longer stunts as well as the ability to catch up with the other jet skis.

Often you will be thrown off your jet ski by aggressive drivers or performing a stunt wrong. They become more aggressive as you advance in Championship mode and it will be harder to finish first despite the fact they don’t really feel hard to catch up to even after falling multiple times off the jet ski. The aggressiveness of other A.I is what really seems to change.

The game features 24 different tracks on three main environments of the Tropics, Greece, and Egypt. These tracks are unlocked throughout the championship game mode and can be played any time individually in quickrace thereafter. After completing every cup, players have the option of playing the tracks i reverse mode or ‘mirrored.

Beside the championship and quickrace modes, there are various achievements to unlock via the achievement tap in the main menu ranging from performing a certain number of stunts, collecting certain numbers of coins or knocking off the leading opponent.

Coins and money bags are collected throughout the tracks and can be used later for funds in the garage. the garage offers new jet ski machines to purchase with better handling and ability for example to perform more advanced stunts in the races. The stunts also add money to the players pocket during the championship races.

There are three categories of stunts from easy to expert that can be activated in mid air by tapping one of the commands that appear. Although fairly automatic some require some manuevering like letting go of the accelerator before landing as not to fall off the jet ski.

Online multiplayer would be great for this title, that already has so much online interactivity through OpenFeint. The A.I seems pretty basic and predictable in the sense they allow you to catch up not leaving you in the dust in all but the most expert of classes in Championship (and even then only to a degree) but at the same time you never really feel like you’re winning or can leave them in the dust when doing well even in first place. I would like the A.I to be a bit more independent of where the player is on the track or how well the player is doing in the race.

I would also like more flexibility in the stunts, and a wider variety of them. Having to pull them off manually and not just by pressing a command was what made Nintendo’s Wave Race series so intuitive and compelling. Although there is some control here it really is too simple for my taste. Although this game outshines Wave Race in my opinion in other areas like the addition of achievements.

IF you are looking for a great title to enjoy for the sheer presentation with great visuals and sound to get lost in, or a racer with lots of content and lasting ability, look no further than Aqua Moto Racing 2. With 24 tracks to play or 48 if you count the mirror mode, and many achievements to unlock this title has some serious staying power and value. At currently only $.99 this is pretty much a steal as games like this are released on consoles and portables for at least $30. This is a great time to be an iDevice owner. The game also runs natively on iPad (the version I played) with Universal Support and on iPhone 4 with Retina support. An iPod Touch option is also available although it’s App Store page says it was designed specifically for the two other devices.