-This review was also posted on TheAppera

The warfare on the eastern front in World War 2 consisted of huge clashes of arms between Nazi Germany and the Soviet Union. Not many games or even films can capture the immensity of the conflict. Tanks after tanks were thrown into cauldrons and smashed to pieces. It is no surprise that the latest online tank game for the iDevices is centered around that conflict. Battlezone 3d Eastern Front($Free)

by Noumena is such a game and you will be able to control famous tanks from the era like the T34 or even the Tiger. This is an ad-sponsored ‘freemium’ game that includes the purchase of tank coins to gain access to better tanks as the other option is to gain in-game currency in through kills. A first-tier tank can be purchased for $300 and doesn’t utilize a single tank coin, second-tier tank can be purchased for 1 tank coin or $500, third for 2 tank coins or $750, and the fourth for $1250 or 5 tank coins. Beginning players start out with 10 coins and the number can grow or diminish depending on how well they play or end up utilizing their tanks.

The game starts you off with $500 and you have to work your way from there if you haven’t purchased any IAP (in-app purchase) tokens. However due to the title still being fairly buggy in the version I tested, sometimes going to the store from the in-game menu can lead to the App crashing. The developers have added some updates but not an official update to version 1.0 on the App Store — in the game’s menu-news screen however they state that they released a balance patch on November 30 and an in-game upgrade of a new map — so they are trying to listen to some feedback it seems and the bugs can hopefully be ironed out. But than again, they still haven’t removed the game’s ads or included a purchase version of the game that removes them despite criticism.

The menu music is fairly standard for such a genre with military-style backround sounds but can get repetitive but once on the battlefield there is only the sound of the engine rolling onwards. There are also some nice sound effects like bullets being fired from your tank or hitting something during battles. The graphics are also fairly good and typical of games of the genre outside the Battlefield series although there aren’t too many shades of color or variation in the backrounds. The landscape in general is barren with trees and hills being the only thing to maneuver around. 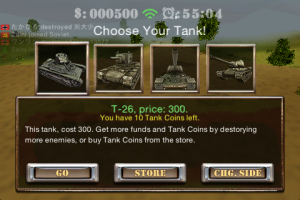 There are two dpad icons near the bottom of the screen that are used for control of your tank. The left icon changes the speed or ability to move backwards and the right icon changes the turret positioning by allowing you to rate it left and right as well as raising and lowering it for aim. The tanks all control in a variety of ways ranging from quick but easy to destroy to the heavy hitters that aren’t as mobile but can fire further away along with their armor advantage. Each class of tank requires its own strategy and mastery of control. In general however, the cheaper the tank the harder it is to be effective against the enemy. There is also a waiting period, that depends on the tank you choose, between reloading and firing succeeding shots. It’s possible to also see ranks and even chat in the game’s menu when waiting for your tank to re-spawn.

The game is an online team tank simulator with simplified or arcade nature that consists of two modes of play. The modes are king of the hill and team warfare. King of the hill has each side battling for control of a hilltop and holding it from the advance of the opposite side. There are four tanks to choose from for both sides ranging from the tin can T-26 on the Soviet side to lS-2 mammoth and on the Nazi side has a similarly weak Panzer-III to the powerful Tiger-I. Beside the main online game mode there is also an offline practice mode that is essentially a deathmatch used to hone skills.

Beside the two dpad icons for movement and speed, The hud display consists of a radar showing locations of enemies and friendlies, HP and ammo, the amount of money accumulated through destroying enemy tanks, and the time left if there is a time limit. There are also small flag icons showing the number of ally and enemy troops and a change of view input as well as a grid set to the speed of the tank as well as two fire icons. The tank controls automatically without having to hold the forward button giving you the ability to concentrate on turning the turret and aiming.

Please add a purchase-version of the game that doesn’t require ads to pop up after being shot. This caused me so much frustration seeing my tank destroyed and quickly the screen turning to some ad or a foreign site as I thought I was still clicking the fire button only to find out I just got destroyed. The ads are also in the multiplayer menu when choosing a game to join so it’s not like that is the only time possible to implement them. I would also suggest more game modes like a survivor type of mode where the last tank wins. There also isn’t really any non-team based options here outside the offline-practice mode for deathmatch fans or lone warriors to play. I like how the developers added the ability to customize your icon image and username in the profile menu.

The action can get very fun and frantic with a lot of tanks shooting in all directions and trying to gain a team advantage. With many rooms being occupied by full 20 person games, and the game being fairly popular there is no reason not to give it a try. There is also some mastery and skill required in aiming and the game rewards you with currency or coins. Although after a while for all except die-hard war gamers and on-the-go tank enthusiasts Battlezone will get repetitive. If some more modes are added and possibly gameplay elements like new vehicles this could provide for a battlefield-like experience or engine to draw from.